Question:
In the Revelation 12 Sign, What or Who
Does Jupiter Represent?

Others believe Jupiter Represents the Church, or the body of Christ. 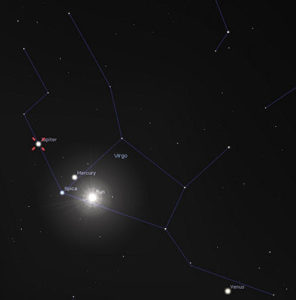 Many watchers are making the connection between the Revelation 12 Sign and the rapture based on the male child’s possible corporate identity as the Body of Christ – the Church.  A number of detractors dismiss this possibility, but in my opinion the evidence is simply too powerful to ignore and even if the astronomical alignment on September 23rd is not the Revelation 12 Sign, I would still argue that the man-child in Revelation 12:5 is meant to represent the Church in union with Christ.  Here are the reasons:

First, it is repeated ad infinitum by detractors that the Church is the bride of Christ and thus the man-child cannot represent the Church.  This is a very exegetically weak argument for several reasons.

For starters, the Church is called a man in Ephesians 2:15.  There are a number of metaphors for the Church in Scripture besides a bride.  The most common is actually Christ’s body (e.g. 1 Corinthians 10:16-17, 12:12-13, 25-27; Romans 12:4-5; Colossians 1:18, 24, 2:19, 3:15; Ephesians 4:4, 11-13).  And what might come as a shock to some, the Church is never explicitly identified as the bride of Christ.  The closest you can come to that analogy is in 2 Corinthians 11:2 and Ephesians 5:22-24.  In the Ephesians passage the Church is likened to a bride in that that the Church is subject to Christ who is the head, but the Church is not said to actually be the bride.  The only explicit reference to Christ’s bride is found in Revelation 21:2, 9-10.  The bride is the city of New Jerusalem, which is revealed after the millennial reign of Christ.  New Jerusalem has characteristics from both Israel and the Church, with gates named after the sons of Jacob (men who died long before Christ’s first advent), and foundations named after the Twelve Apostles.  Zion, which is a prophetic term for heavenly Jerusalem, is likened to a woman in labor in Isaiah 66:8, so in a certain sense it is really Zion, the mother of all the saints both pre- and post-Christ, that is the wife of the Lamb.  We need to remember that bride is just one analogy of many for the Church, just as body is.  The Church is just as often compared to a temple (1 Corinthians 3:16-17, 6:19; 2 Corinthians 6:16; Ephesians 2:19-22; 1 Peter 2:5).

Second, the Apostle John makes a grammatical error in Revelation 12:5 when he modifies the masculine huios (son) with the neuter word arsen.  If you believe that God’s Word is infallible, then you’re only left with one option: John made this mistake intentionally.  And sure enough, his use of arsen appears to come directly from the Septuagint version of Isaiah 66:7-8 where we see the same imagery of a woman in labor with a male child.  Isaiah 66:8 gives the male child an unmistakable corporate identity – he is a nation born in a single day.  1 Peter 2:9 says the Church is a holy nation.

Third, Revelation 12:5 says that the male child “will rule all the nations with an iron scepter”.  This is an important clue.  There is no question that this phrase relates to Christ as can be seen in Psalm 2:9 and Revelation 19:14-15.  However, Revelation 2:26-27 unmistakably gives the promise to “rule with an iron scepter” to the Church, as well.  There is no way to get around verse 27 – Christ, in union with His Church, will rule the nations with a rod of iron.

Fourth, the corporate identity of the male child preserves the symbolic pattern of Revelation 12: the woman is Mary and Israel, the dragon is satan and his kingdom, and the child is Christ and His Church.

Fifth, the use of harpazó in Revelation 12:5 is a huge clue.  Harpazó is the same word used for “rapture” or “caught up” in 1 Thessalonians 4:17 and means a sudden removal by force.  Jesus’ ascension was never once described using this word and in fact the Apostle John himself (the author of Revelation) calls Jesus’ ascension anabainó in John 20:17 – meaning to go up, ascend, or rise.  When Jesus ascended to Heaven He had already conquered death and sin.  He was in absolutely no danger from anyone.  The Bible says He left not to escape satan, but because it was beneficial for the Church (John 16:7).  There is simply no way to reconcile the context of Revelation 12:5, which is a sudden snatching away by force from the imminent danger of the dragon, with Jesus’ ascension.

Seventh, I firmly believe that the early Church was dispensational, premillennial, and pretribulational.  However, with the rise of Augustinianism, the Church went through a 1,400-year hiatus where prophecy tended to be mistrusted and allegorized.  The founders of modern dispensationalism who re-popularized the pre-trib rapture such as Darby and Ironside found Revelation 12:5 to actually be the chief proof-text of the pretribulational rapture of the Church.  By the early 1900s, this proof-text was largely forgotten by pre-trib proponents and arguments in favor relied primarily on secondary evidence, which led to the rise of mid-trib, pre-wrath, and post-trib views in the Evangelical churches.  I find it fascinating that around the same time the Revelation 12 Sign was first spotted using astronomy software (sometime in 2011 or 2012), a number of scholars, such as Michael Svigel, re-discovered the use of Revelation 12:5 as the chief pre-trib proof-text.  The timing is impeccable.